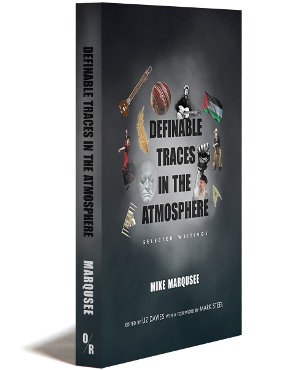 Mike Marqusee (1953-2015) was a writer and political activist. Born in the US, he lived in Britain from the age of 18. He authored a wide range of books, on cricket, nationalism, the Labour Party, popular culture and anti-zionism, and columns, with an anthology of articles due to be published early in 2018. He was active in the Labour Party, anti-racism, anti-war and other political campaigns. END_OF_DOCUMENT_TOKEN_TO_BE_REPLACED

Spare us the “positivity”

Reading Owen Jones’ Guardian tribute to Stephen Sutton, the teenager who died this week after raising £3 million for a cancer charity, I found myself becoming more and more perturbed. In fact, downright angry. Jones’ tribute was heartfelt and I am in no doubt that Stephen was an admirable young man who made a genuine… END_OF_DOCUMENT_TOKEN_TO_BE_REPLACED

“Nothing short of magic”

Steve Andrew reviews The Price of Experience for The Morning Star, 12 May, 2014 WHEN Mike Marqusee was diagnosed with multiple myeloma in 2007 he was adamant, largely for reasons of privacy, that he wasn’t going to write about his experience. But he changed his mind and a good thing he did so because he… END_OF_DOCUMENT_TOKEN_TO_BE_REPLACED

Original things to say on a much covered subject

Mike Phipps reviews The Price of Experience for Labour Briefing, May 2014. When diagnosed with cancer in 2007, Mike Marqusee was determined not to write about it. We should be thankful that he has done so, because on this much-covered subject, he has many original things to say. Politicians talk about waging a “war on… END_OF_DOCUMENT_TOKEN_TO_BE_REPLACED

Ephraim Mirvis, Britain’s current Chief Rabbi (in fact, he’s the Chief Rabbi of the orthodox United Hebrew Congregation, to which only a minority of British Jews are affiliated) has penned an appalling column in Jewish News. Mirvis is leading a group of 50 Rabbis in “one of the largest ever rabbinic missions to Israel from… END_OF_DOCUMENT_TOKEN_TO_BE_REPLACED

In a confidential report (revealed by Jewish News), the Board of Deputies of British Jews at last acknowledges that there is a significant division of opinion about Israel among British Jews. However, it proposes to address that division not by promoting open, informed debate, but through pro-Israel forces adopting a somewhat subtler, softly-softly approach. The… END_OF_DOCUMENT_TOKEN_TO_BE_REPLACED

Courageous and prophetic: Tony Benn in the early 80s

Mike Marqusee remembers one of the great modern communicators of the socialist cause It was inevitable that Tony Benn’s death would be met with tributes from the political establishment to the effect that they admired him even if they didn’t agree with him. But for those of us who did agree with him, his life… END_OF_DOCUMENT_TOKEN_TO_BE_REPLACED

The argument against Western imperialism can only be strengthened by a firm opposition to other imperialisms, argues Mike Marqusee Red Pepper blog, 5 March 2014 It really should be easy enough to condemn Russia’s action in Ukraine while at the same time rejecting and campaigning against US-EU military intervention. Sadly, there are some in the… END_OF_DOCUMENT_TOKEN_TO_BE_REPLACED

Clay vs Liston: how a new horizon was opened

Fifty years ago, Cassius Clay “shook up the world” by winning the heavyweight title – and embracing the Nation of Islam On the night of February 25, 1964, the 22 year old Cassius Clay defeated the supposedly undefeatable Sonny Liston to become the Heavyweight Champion of the World. It was an upset of historic proportions… END_OF_DOCUMENT_TOKEN_TO_BE_REPLACED

The Times They Are A-Changin’ – fifty years on

The Guardian, 22 February, 2014 Fifty years ago this month, the 22 year old Bob Dylan released his third album, The Times They Are A-Changin, the acme and as it turned out the end of his “protest” period. Dylan renounced this genre so quickly, and took his fans on such a giddy journey afterwards, that… END_OF_DOCUMENT_TOKEN_TO_BE_REPLACED

The Nazi Olympics – a missed opportunity?

As Gareth Edwards reminds us in his excellent letter in today’s Guardian, Jesse Owens was able to give the Nazis that slap-in-the-face at the 1936 Berlin Olympics because the boycott campaign preceding it had not been strong enough to stop the US, British and other national Olympic authorities from taking part. In the US, as… END_OF_DOCUMENT_TOKEN_TO_BE_REPLACED