1200 BC: The world’s first industrial action … rescuing the past for the future

The city of Luxor in southern Egypt made the headlines in Britain at the end of February, when 19 tourists were killed in a hot air balloon accident. That tragedy will compound the woes of Egypt’s tourist industry, once a major source of employment and foreign currency, now languishing as foreign visitors are driven away by (misconceived and exaggerated) fears of instability and violence.

Luxor, the site of ancient Thebes, the principal capital of the Egyptian New Kingdom (1550-1050 BC), is studded with colossal carved temples and richly decorated tombs. But the most revealing and moving of its many ruins may be the least spectacular. Known as Deir el Medinah, these are the low-lying remains of the workers’ village, home to the artisans who built the tombs and temples. Their small, sturdy domestic units are laid out on a grid pattern. Here lived stonemasons, tomb painters, carpenters, ropemakers, porters. Scattered among the excavated foundations are mini-pyramids and entrances to underground burial vaults, small in scale but decorated with as much care, as much wealth of colour and detail, as the royal tombs in the nearby Valley of the Kings. These workers had their own visions of an afterlife, a better life. And they had a sense of their own value.

This is the site of history’s first recorded strike. The workers were paid in grain, from which they made bread and beer, the staples of the Nile Valley diet. In about 1200 BC, the state treasury, drained by Rameses III’s imperial wars, failed to meet its commitments. The workers downed tools and staged a sit-in at the construction site of the Pharaoh’s mortuary temple. Perhaps surprisingly, they won the dispute. Their leverage was their masters’ fear of dying without the proper funerary arrangements, entering the afterlife under-equipped. The Egyptian cult of the dead, for once, benefited the living.

What are we to make of this episode from remote antiquity? Walter Benjamin, in his prophetic final essay, “Theses on the Philosophy of History”, written in 1940, distinguished between two opposing approaches to the past: “historicism” and “historical materialism”. For the former time is linear, uniform, cumulative. “Its method is additive: it offers a mass of facts, in order to fill up a homogeneous and empty time.” In contrast, the historical materialist “records the constellation in which his own epoch comes into contact with that of an earlier one.” The job of the historical materialist is not to reproduce but “to explode the continuum of history.”

Benjamin asks: “With whom does the writer of historicism actually empathize?” “The answer,” he insists, “is irrefutably with the victor.” History becomes a “triumphal procession in which today’s rulers tread over those who are sprawled underfoot. The spoils are, as was ever the case, carried along in the triumphal procession. They are known as the cultural heritage.” In contrast, for the historical materialist, “the cultural heritage is part and parcel of a lineage which he cannot contemplate without horror. It owes its existence not only to the toil of the great geniuses, who created it, but also to the nameless drudgery of its contemporaries. There has never been a document of civilisation which is not simultaneously one of barbarism.”

There’s no better illustration of that ringing dictum than the art of ancient Egypt, the product of a brutally stratified society governed by a religion of state power, personified in a god-man ruler. Yet long after the system that oppressed them crumbled, the work of the artisans of Deir el Medinah remains vital, colourful, rhythmic and refined; it excels at grand effects but also in delicate naturalistic detail. Whether in the vast vaults of the Valley of the Kings or in the humble tombs of Deir el Medinah itself, the afterlife is depicted as a better version of this life, furnished in abundance with the good things of this life: food, drink, flowers, birds, song, dance, family. Ancient Egyptian art remains alien, at times weird. But it’s also recognisably human; it leaps across chasms to forge a connection.

On the left we see ourselves as makers of the future fully engaged with the present. We look ahead, not behind, and we resent the charge that we are “wed to out-moded doctrines” and in particular that we have failed to adapt to the changes of the last thirty years. But we should not be ashamed of being “conservative” in defending rights won in previous generations or communities threatened by “development”. Capitalism’s disregard for the future, its bias in favour of the short-term, is notoriously reckless. But it;s equally reckless in its disregard for the past, unless that past can be packaged for consumption or the transmission of propaganda. In either case, the past is not allowed to stand independently, to speak with a voice of its own. And to demand from us some accountability.

Benjamin says our task is “to brush history against the grain.” An example of this in our own moment is the 23 year campaign for justice for those killed at Hillsborough. Though justice itself has yet to be done, much of the truth has now been established. This was achieved only because the families and their supporters defied the massed chorus telling them their quest was futile, emotion-driven or vindictive. Their sense of duty to the dead was not diverted by appeals to pragmatism and the virtues of adjustment, of “living in the present”. As a result, they succeeded in recovering a suppressed history which, in turn, becomes an active element in our present and future.

In Spain, the Association for the Recovery of Historical Memory aims to document the fate of Franco’s victims and to excavate and identify their bodies, including the tens of thousands dumped in mass graves. To do this, the Association has had to defy the “pact of oblivion” that smoothed the transition to democracy by shielding members of the old regime from accountability. In this case, a sense of obligation to the dead, to those who were on the losing side, was not a “backward-looking” indulgence: it was a social necessity. We can’t decipher the present without examining its foundations in the battles of the past, acknowledging losses as well as gains.

The Palestinian insistence on recognition of the Nakba – characterised by pro-Israel commentators as a vain desire to recoup a lost battle – is in fact a necessary engagement with the realities of the present: the ongoing impact of the Nakba in the policies of dispossession and ethnic cleansing. At the same time, it’s a steadfast insistence on a future of self-determination.

Despite their brief victory, the workers of Deir el Medinah never escaped their state of impoverished servitude. They were on the “losing side” in the march of history. Nonetheless, in their art and in their action, the workers of Deir el Medinah remind us, in Benjamin’s words, that the “fine and spiritual … are present in the class struggle as something other than mere booty, which falls to the victor. They are present as confidence, as courage, as humour, as cunning, as steadfastness in this struggle, and they reach far back into the mists of time. They will, ever and anon, call every victory which has ever been won by the rulers into question.” 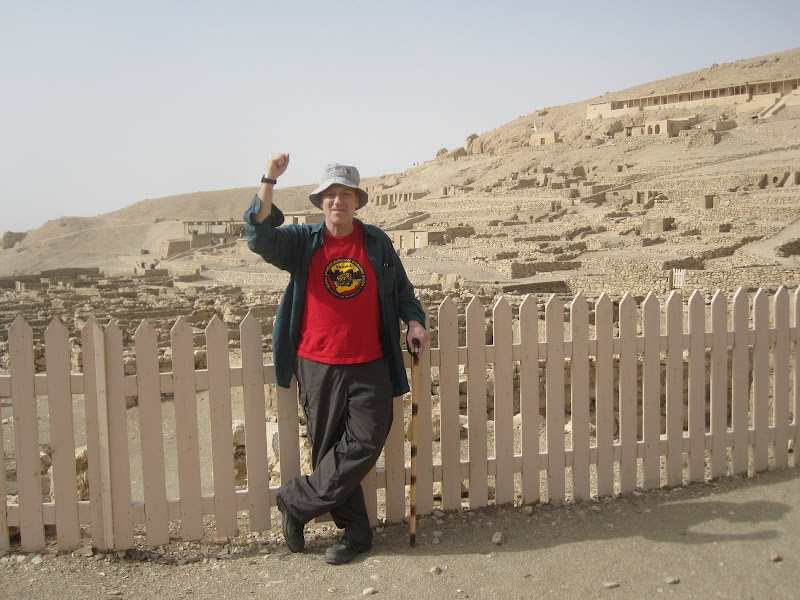 Tags: Egypt, History, Labour movement, Travel, Walter Benjamin
From: Columns by Mike Marqusee, Contending for the Living, Culture, Politics
← The man who went beyond a boundary
From the pyramids to Tahrir Square →